Futures That Are Full of Paradoxes: Thank You, Black Quantum Futurism

Defining Black Quantum Futurism’s vision for the future, collective member Rasheedah Phillips exclaims during an interview with nonprofit art space Apex Art, “We’re moving towards a place where there is multiplicity and paradox and multiple things can be true at once without … conflict that’s going to disrupt the universe and split it apart.” Her statement invokes physicist Erwin Schrödinger’s infamous 1935 thought experiment, in which he imagined placing a cat in a steel chamber along with a relayed system that included a Geiger counter and a small amount of a lethal radioactive substance that, if decayed, could trigger a hammer which would break a flask of lethal acid, potentially killing the cat. According to quantum mechanics, it would be impossible to tell what state the elemental particles of the radioactive substance were in—in other words, whether or not the particles had decayed or not—because the materials in the chamber would not be observable. Therefore, according to the purveying logic of quantum physics, the cat would be both alive and dead simultaneously until the steel chamber was opened and the cat could be seen with naked eyes. Despite the perversion of Schrödinger’s cat in popular mythology, this experiment never happened in earnest in a laboratory. This is perhaps one of the most famous examples of scientific allegory. At its core, it’s a story, a tale, a fantasy, used to complicate a fundamental principle of quantum mechanics and better explain our lived reality. 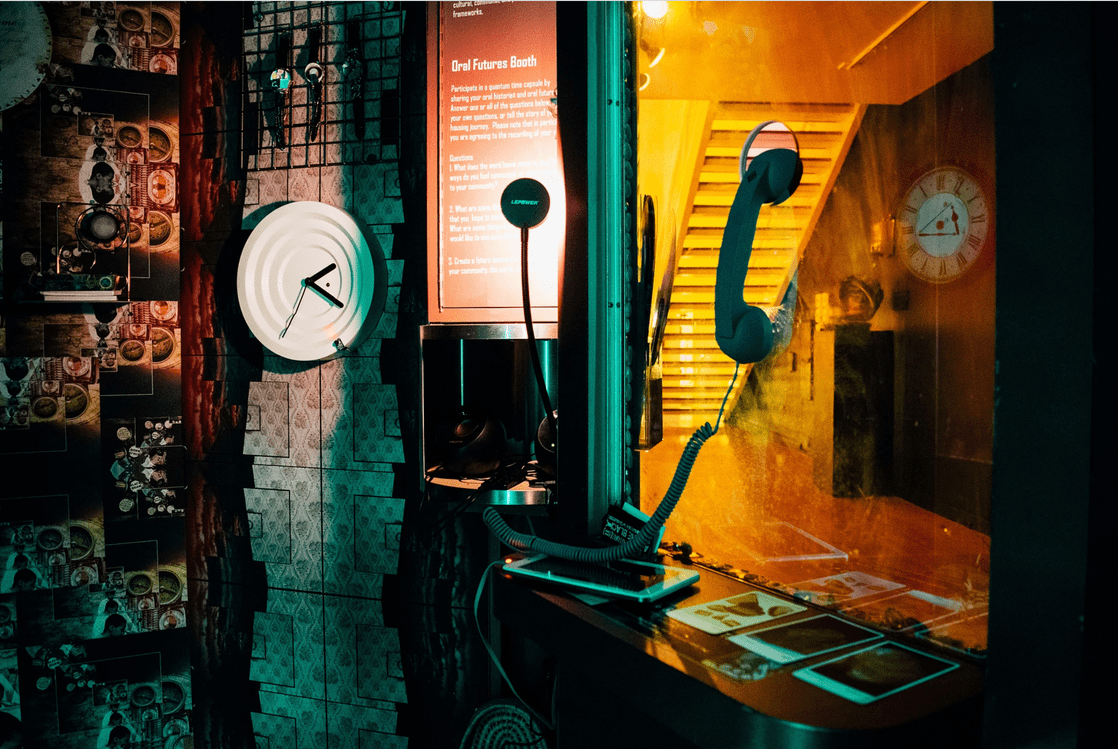 Black Quantum Futurism also uses science as a prompt, as poetry, and as a metaphor, fusing the “facets, tenets, and qualities” in the framework of quantum mechanics with Afro-diasporic modes of describing, in their words, “consciousness, time, and space.” With Afrofuturism as a starting point and point of departure, Black Quantum Futurism gives Black folks a tender offering: a description of life and a method of envisioning the future, applicable across the globe but informed by their hyperlocal community in Philadelphia.

A collective led by Rasheedah Phillips and Camae Ayewa, Black Quantum Futurism is a tangle, all the more so because its members are inspiringly poly-hyphenate. (We might be reminded again of Schrödinger’s cat.) This defiance of categorization is political in a society built on hierarchy, rigid definition, and narrow visions for societal participation. Embracing multitudes may even function as a technology to protect against co-option, tokenism, and the white gaze. If you try to jump on the bandwagon, the question is: which wagon? A sampling of their infinite titles—Phillips is a writer and an author of speculative fiction, an award-winning public interest attorney, a theorist, a mother, a queer woman, a community activist; Ayewa is a curator, a graphic designer, a photographer, a collage artist, a workshop facilitator, co-founder of Rockers! Philly (a recurring music festival centering marginalized artists), and a musician performing in several solo and group projects including Moor Mother, Irreversible Entanglements, 700 Bliss, The Mighty Paradocs, and unnamed collaborations with artists such as billy woods, YATTA, Nicole Mitchell, and many others. Black Quantum Futurism is maybe best understood as a space of possibility.

Black Quantum Futurism is informed by theory conceptualized by the duo and written by Phillips. In tandem with a deeply interdisciplinary art practice that includes performance, music, moving image, installation, visual art, poetry, theory, workshops, and creative research projects, their work is rooted in community, activism, and healing. Black Quantum Futurism works in the realm of the theoretical and experimental, but the scientific foundations of this expansive body of work aren’t purely lyrical; Phillips and Ayewa just received the Collide Residency Award, an arts residency at CERN, the European Organization for Nuclear Research, alongside some of the world’s most respected physicists and engineers. 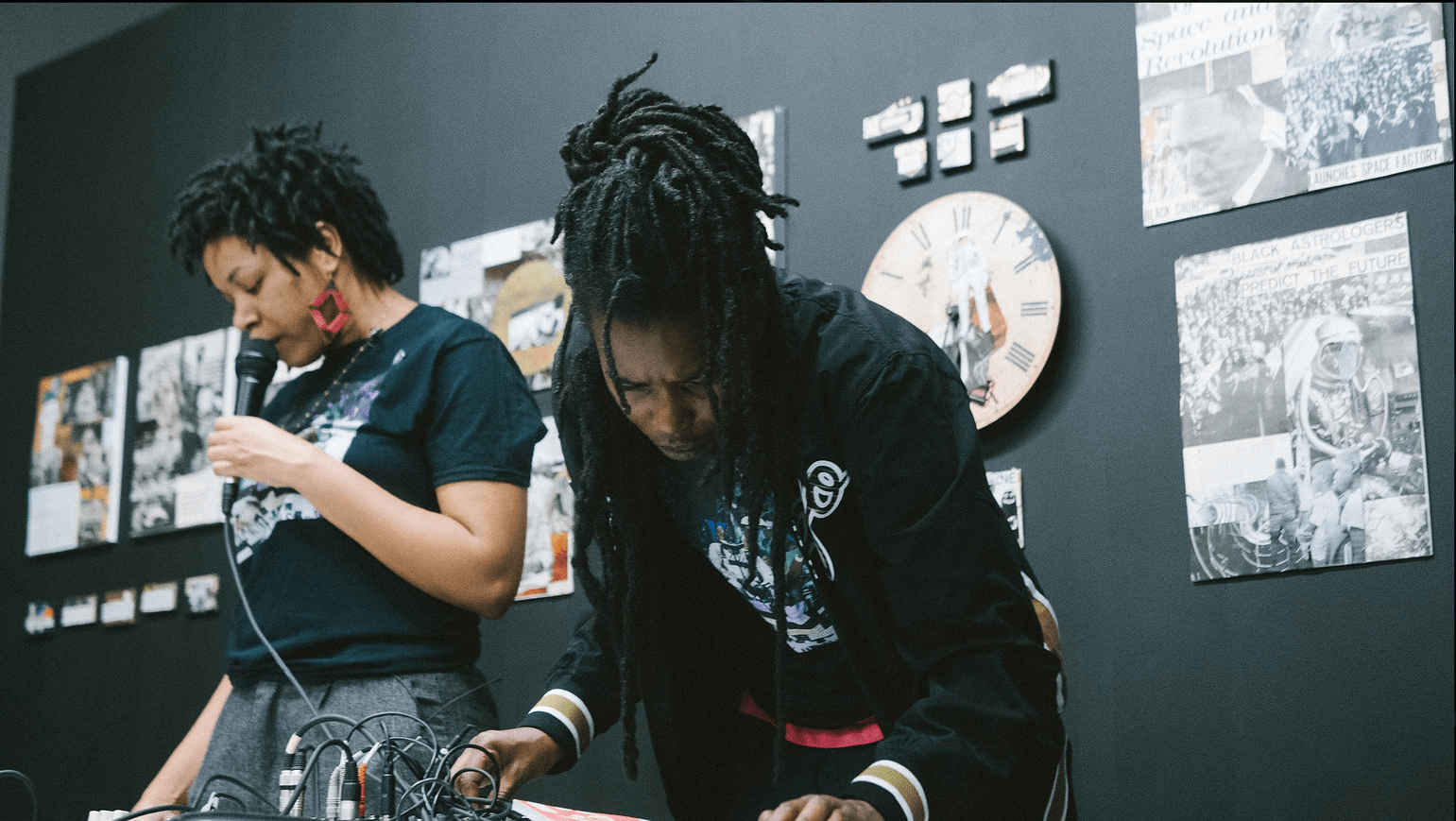 Specifically, as the name suggests, Black Quantum Futurism tackles time, providing a new model through which Black people can experience reality in the present, interpret the past, and project into the future. But, in actuality, their model of temporality is much less delineated than I just described. Black Quantum Futurism’s experience of time is wholly nonlinear and space-dependent. In their own public description of their work, they write, “Under a BQF intersectional time orientation, the past and future are not cut off from the present—both dimensions have influence over the whole of our lives, who we are and who we become at any particular point in space-time.”
‍
Black Quantum Futurism reminds us that globally-standardized linear time is not endemic to our condition as human beings on planet earth. In reality, our current relentless, clinical conception of time supplants localized temporalities informed by nature: sun-powered clocks, water clocks, shifting sands in hourglasses, following the movement of shadows behind obelisks. Time—the version that kept the trains running in the 19th century, that keeps us at our work desks until late at night, that reminds us rent and mortgages are due, that services appointments and Google calendars and governments and authorities—was invented. It was created by white people and institutionalized in service of capitalism and colonialism. In other words, in service of oppression.
‍
A driving philosophy for BQF is “dismantling the master’s clock” which takes many forms in their work: as essays, lectures, books, articles, and exhibitions. In each of these cases, they question the history of the clock and object to the notion of it being a banal tool without a politic.
‍
One method of circumventing the “master’s clock” is time travel. In Black Quantum Futurism’s framework, memory is an important tool to disrupt linear time and splinter off from it, particularly along matrilineal lines: mothers, grandmothers, and greats. For Phillips, familial lineage provides a “highway of sorts” for time travel: to gather and revise information, and see a window into our ancestors’ experiences. Time travel is fueled by heritage, and spirals along the helixes of our DNA. Phillip notes: “They are everywhen we will be, been everywhen we are.” Memory is just one form of time travel for Black Quantum Futurism. Another mode of transportation is music, which Ayewa specifically refers to as a form of “DIY time travel.” Through Black music—spirituals, hiphop, African American classical music, gospel, ∞—we can access voices of the “past.” Ayewa uplifts oral/aural history and storytelling, which often persists in Afrodiasporic cultural traditions through ingenuity and necessity when Black histories are delegitimized and forcibly forgotten. On Ayewa’s song “DIY Time Machine” on the 2016 album Fetish Bones, Ayewa coos, “One time we sung the same song for five years. Next thing I knew, I was home back in the projects.” 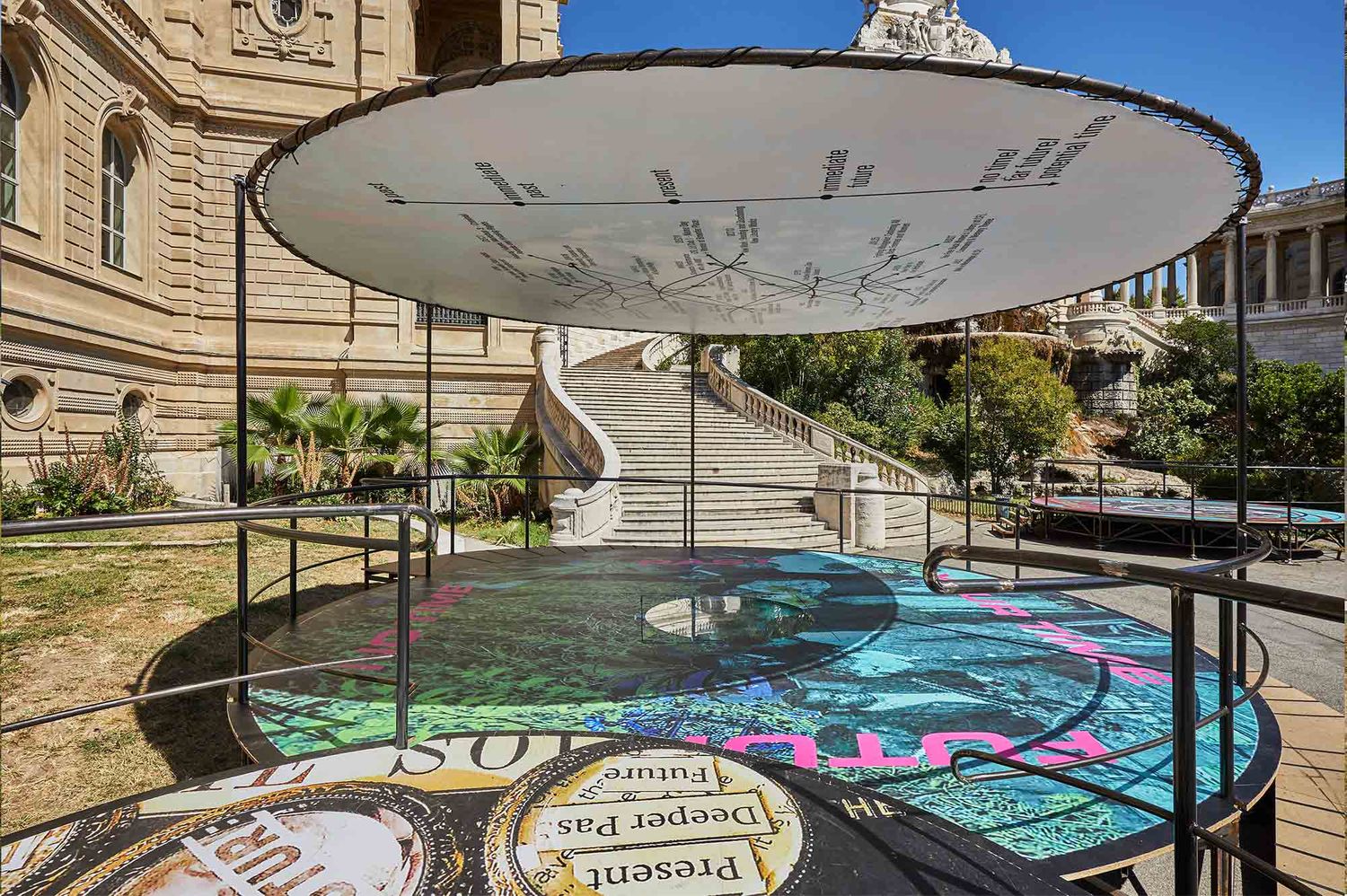 Black Quantum Futurism offers us (space)time to subvert the logic of white supremacy, which has corrupted fact and concocted pseudoscience for centuries in an attempt to validate its own existence. Among many examples: eugenics, phrenology, and the development of human zoos in the 19th and 20th centuries. Even quantum physics, the legitimate science of elementary particles and their interactions, catalyzed the atomic age in the 1940s, in turn birthing jingoist experimentation with violent technologies that continue to ravage the planet. Instead, Phillips and Ayewa use quantum physics to turn binaries into pluralities; feminisms defer to womanism; hierarchies are dissolved into communal and cooperative networks; universalisms about the human condition and human body are transformed into nuanced, flexible frameworks that allow for what Phillips describes as “futures that are full of paradoxes...futures that are not necessarily resolved, futures that are not fatalistic….” I am comforted by the radical self-determination of prioritizing Black points of view over a universal (read: white) one. Black Quantum Futurism assures me that I can dance on the vast, blurry line separating “Art” from “non art”; I’m also assured that artists are humans and live in the world, not apart from it.

If Afrofuturism and sci-fi reach out to the cosmos, synergistically but divergently, Black Quantum Futurism reaches inward to the atomic and subatomic. The intangible, and the subjective. Messy, but foundational. I’m writing this in February, caught somewhere between Black History Month and Black Futures Month. Black Quantum Futurism reminds me that I don’t have to choose. The future and the past are inseparable and expanding on multiple paths; we don’t have to chase a singular utopia.