During a time of ongoing flattening of Black life in media spaces, most notably those reporting on the violence of policing, Sondra Perry asks us to inhabit a different atmosphere of relation. Her work creates what cultural theorist Gayle Wald calls an “archive of affect,” a concept discussed in Deborah A. Thomas’s book Political Life in the Wake of the Plantation (2019), which confronts how to make an archive that is not oriented to a past or some future imaginary of a redemptive scene, but rather one that is steeped in the absences and forgetting of colonial afterlives, with a recognition of how everyday people innovate and assemble unobligated to some teleology of vision. Perry’s work follows in this wake, exploring the plantation’s waves as they rock up in the present and pushing at the constellations of their abstracted forms. Her work reminds us of the technologies of embodiment at an affectual and political level and the archiving effect of these captures in media technologies. The work, such as Typhoon coming on (2018), suggests new possibilities for social relations in the digital space and the external architectures that house and mediate the modality of screens, such that we register the screen for what it hides rather than what it projects.

Perry’s previous work on the digital comes together most explicitly with the material residues of the plantation in you out here look n like you don’t belong to nobody: heavy metal and reflective (2019). The work mixes “HD video on monitor, sound, an iron casting crucible, 7-pound sad irons, railroad spikes, 18th–19th century crab rattle shackles, 18th–19th century shackles, Campo del Cielo iron meteorites, black iron oxide, red iron oxide, 1-Octen-3-ol, web cameras, hard drives, SD card readers, audio and video cables, and water” as an inventory of the material life of blackness. The installation brings together a forge and foundry of Black life organized around the forms of its compressions and the sparks of its liberation: the shackles that were cast to hold, drag, and punish enslaved persons into a so-called New World through the portal of the Middle Passage, where the most intimate arrangements of flesh and life met metal as restraint and constraint; the crucible that cooked that particularly noxious colonial aggregate of race and geology for the displacement and attempted extermination of Indigenous peoples; and, the spikes and iron that laid the track for Westward expansion and ecological monocultures. It is a new ledger and a monument to the mutualities of erasure in a material register. Plantations were a mine that stripped enslaved persons and the earth simultaneously—subjects and matter under the extractive regime of White Geology.

In Perry’s Typhoon coming on, she digitally manipulates the sea from J.M.W. Turner’s 1840 painting Slave Ship (Slavers Throwing Overboard the Dead and Dying, Typhoon Coming On), referencing the haunted visual archive that remains in the deformation of subjecthood and survival. Recalling the drowning of 133 enslaved persons by the captain of the British slave ship, Zong, in order to claim compensation for these “goods” under the salvage clause of the ship’s insurance policy, the piece reworks the heaviness of the Passage and its human cargo in a double take that bends time and space, where the viewer takes up occupancy in a water rower in the flood of the ocean. The sea and its watery graves are rendered embodied, actual, and occupied. If repair is not possible, embodiment might mitigate the statistical bodies created in the violence of the imperial archive.

In the wake of the plantation, many of the enslaved became skilled metallurgists and worked as blacksmiths to craft the metal of the sugar mills, the architectures of the factories of sugar and rice, and the holdings of wagons. Post emancipation, many of these blacksmiths found work in the mines, forges, and furnaces, pouring ingots and steel railway lines, manufacturing the infrastructures of modernity and urban life. Many younger Black boys and men found themselves kidnapped under spurious Black Codes and captured in the convict lease, interned in prison mines or furnaces that transformed America from an agricultural state to the biggest industrial nation in less than fifty years. This heavy metal work installed racialized burdens in the anti-Black gravities of the day. Reflected in the dark, mercurial surface of the crucible in Perry’s heavy metal and reflective is an image of the fire that transforms and brands mineral and flesh. As a site of recall and affective archive, the shackles hang above in the dimensionless embrace of a blood colored velvet, sinking in the red liquidity of the screen. The formation of spike, screen, and crucible has the layout of a terrible experiment, carpeted in the luxurious fabrics of wealth and privilege that were extracted through the violence of the terrible trade. The spike is also a prism, a way of seeing the past, through this amalgam of its violently melded history. 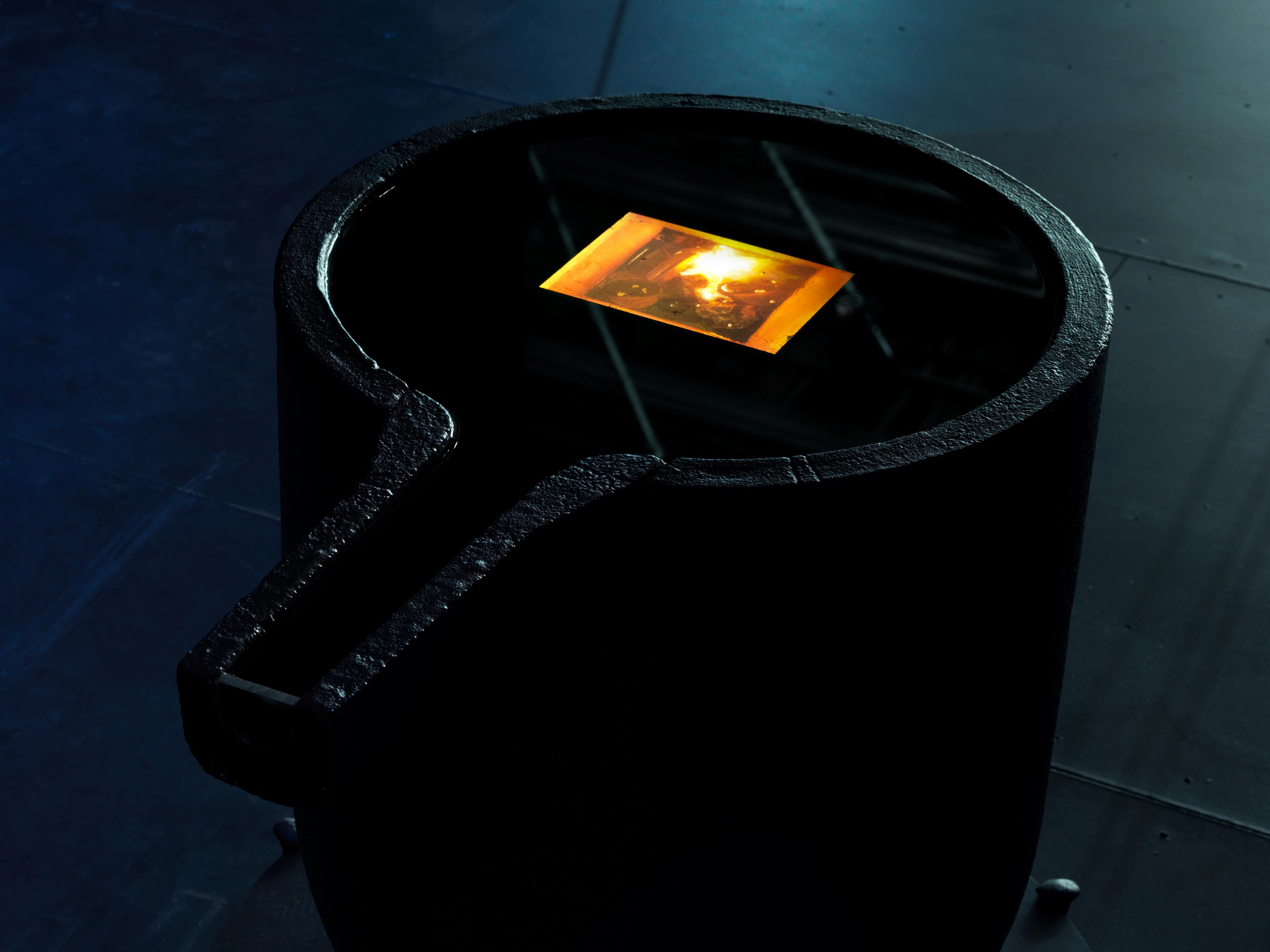 Most curious to me is the meteorite in Perry’s melted spike of origination. A rock that won’t melt, unless you can recreate the conditions of atmospheric burn. In my work on the inhuman and its proximity to racial forms, these celestial rocks represent a broader cosmic materialism that formed as a liberatory channel in Black life under subjection. From following the North Star of Harriet Tubman’s Underground Railroad to the practices of African spiritualism, the cosmic (which the meteorite is a concentrated reality of) was a way to freedom in the tight and brutal spatialities of slavery and its afterlives. The particular meteorite in Perry’s work, a Campo del Cielo iron meteorite, comes from a cosmic storm 4.55 billion years ago. This sky metal is scattered time left over from the formation of planets, and thus it speaks to survivance beyond the hold of the present and its violent pasts.
‍
Materialities that hold the past also hold the future, from heavy metals and their toxic body burdens in the present, to Frantz Fanon’s cosmic “yes” that radically reinvented the abysmal as a buried sun and celebrated this “cosmic effluvia” as a “sympathetic affinity with the earth” (Black Skin, White Masks, 1952). Thus Perry’s engagement with materiality channels embodiment in this potent space of race and geology, as it makes anew an affective archive of memory. The title—you out here look n like you don’t belong to nobody—takes us straight to the painful histories (as Édouard Glissant named them) that these geographic and psychic displacements enacted, that made the Middle Passage such a profound scene of orphanage. The quality of violence that characterized the origin story of oceanic orphanage continued as a paradigm in Black life through the plantation and into the genealogical cuts that families in the present suffer as their children are taken by police violence and the prison state, and all the less explicit forms of diminishment of Black life. 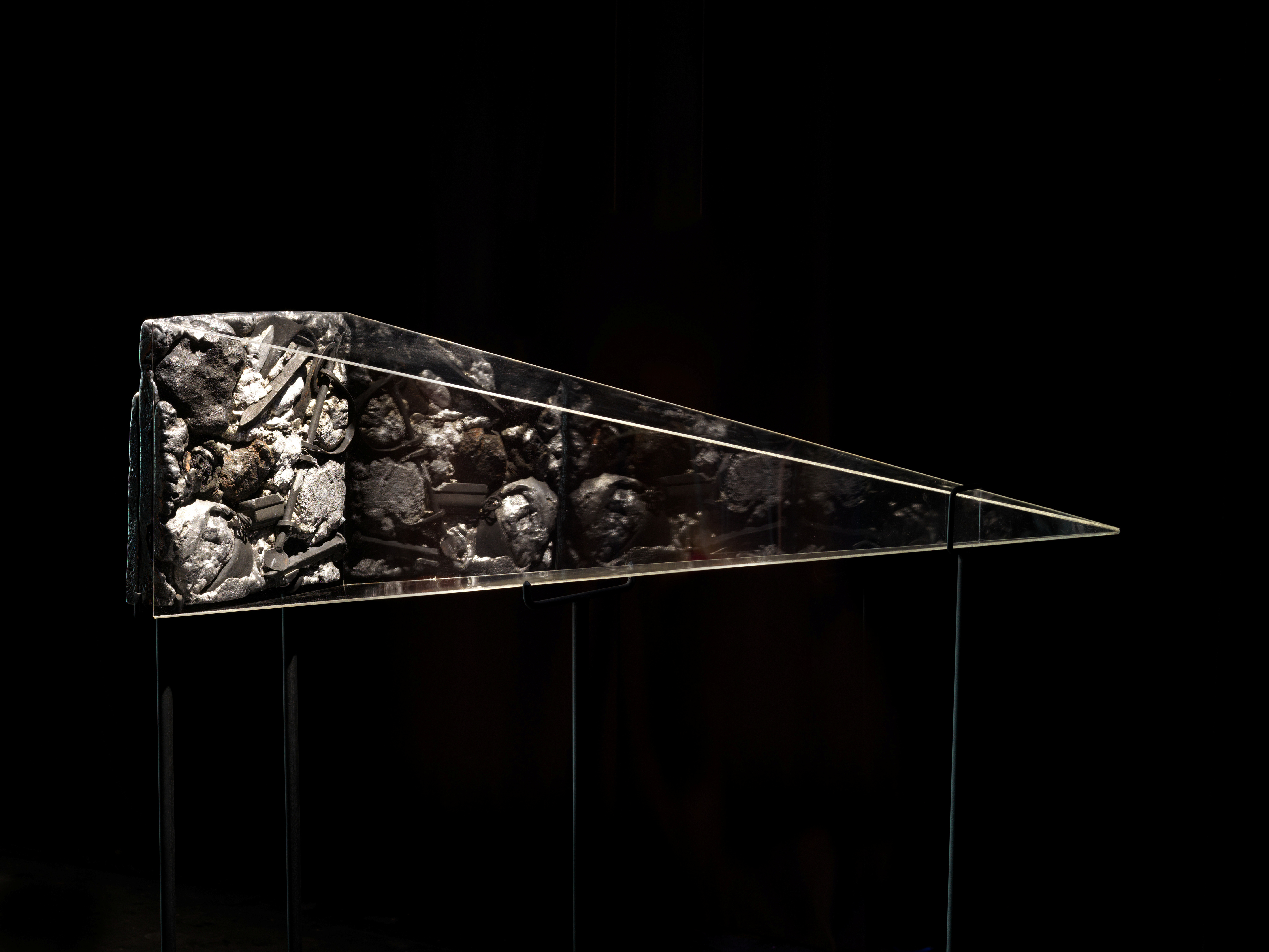 I have not seen this piece in person, and I wonder if it mirrors back as a reflective statement (as in the title) on what it means to carry heavy metal in blood and bone. I come back to the meteorite and I think of the Northern stars sewn into quilts as a message to go down to the river and cross the water and forge something else from the earth. The meteorite is the ultimate orphan that comes from the far flung, outside and within the universe, without which no earth would have come into existence. It is a different story of extraction and Sondra Perry is telling it.